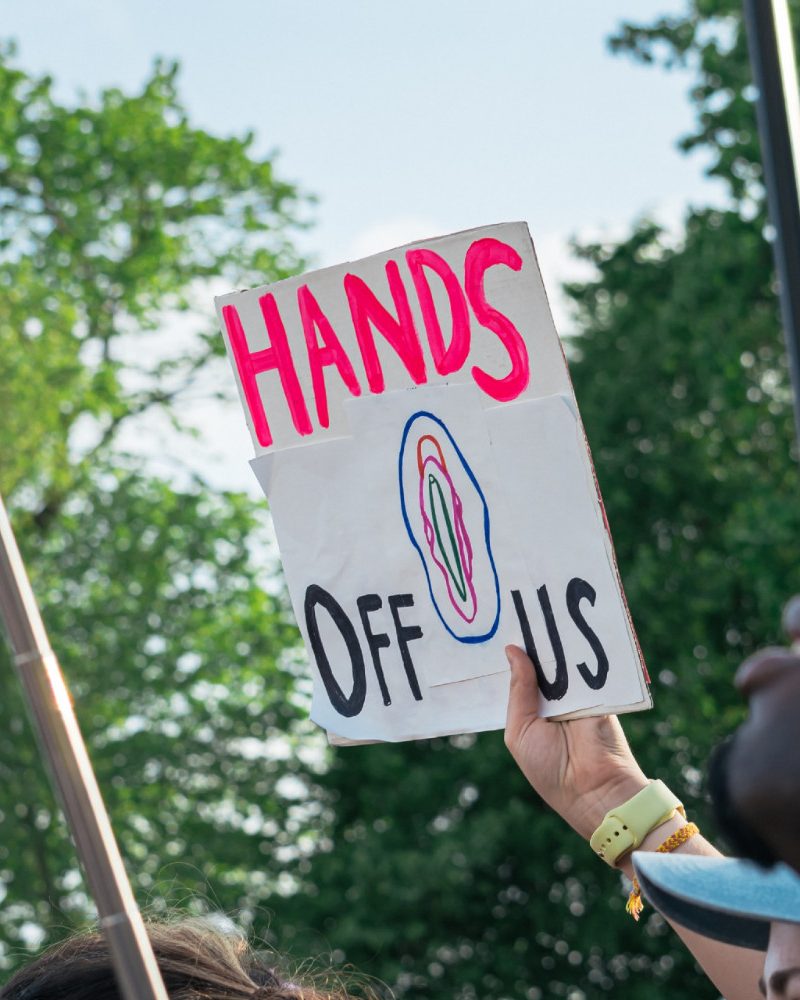 These are dark days for women in the US – and for their friends and allies around the world. The consequences of the US Supreme Court’s overturning of the Roe V Wade ruling is arguably the most devastating blow to women’s rights for over a century.

As women, we are mourning for the loss of freedom, and the right for every woman and girl to make their own decisions about their bodies and their futures.

We are also worried about what other human rights – such as homosexuality, same-sex marriage and contraception – SCOTUS may be eyeing next.

What was Roe V Wade? And what has changed?
In short, in 1973, the Supreme Court took a landmark decision that gave women the constitutional right to an abortion. Last month (June 24th), the Supreme Court overturned this, ruling in favour of bans by Mississippi and other States on abortions after 15 weeks. It means that all States can now take the decision individually to ban the procedure.

How did we get here, and how did we allow this to happen?
Trump has been held to account for chasing a populist vote in right wing parts of the US, for empowering religious groups, and for transforming the Supreme Court by nominating ‘Constitutional’ Republicans. He has been celebrating the ruling against abortion rights, and boasting about the part he has played.

However, last month’s ruling was not unexpected, and some commentators have suggested that the Democrats have been caught sleeping on the issue, and that left and the ‘liberals’ have been sidetracked by discussions about who can and can’t be called a woman – rather than fight harder for the autonomous rights of all women and girls on this important issue.

What next?
Things are expected to move swiftly, with over a dozen States reportedly ready to implement the ban. Other States have declared that they will continue to allow women to have an abortion, but as many have suggested, this opportunity will not be available to all. Those in under-privileged communities are unlikely to be able to afford the cost of travelling for the procedure. Many will be criminalised by seeking out ‘back street’ abortion clinics. Many more will be forced to have children that they don’t want or can’t afford. Others still will suffer health issues – or die. Babies too.

In addition, clinics in the States which will keep abortions legal will be under pressure to manage procedures of local women, and those travelling there from other areas of the US. And this will mean that no woman will be guaranteed an abortion even in those more liberal areas.

And how many more restrictions will be placed upon women and their bodies? Oklahoma has written legislation that states that life starts at fertilisation. That could mean contraception like IUDs are made unlawful.

Other human rights may be at risk too. One of the Supreme Court judges, Justice Thomas, has already suggested that the precedent of overturning Roe v Wade could be used be applied to States banning same-sex marriage or even homosexuality.

And the ramifications of this new ruling are being felt outside of the US already – in Europe, far right and religious groups in the UK, Spain and Italy are celebrating the end of Roe V Wade and even claiming that their countries will be next to roll back reproductive rights. If you think that sounds unlikely, remember that in Northern Ireland – a province of the UK, a G7 country – it was illegal for women to have an abortion until 2019. And when a vote was taken in Westminster, nearly 100 UK MPs voted against changing that law.

More worrying, following the new US ruling on reproductive rights, one UK MP, Danny Kruger, responded to the news with a speech to the UK Parliament, saying: “The facts are that I would probably disagree with most members who’ve spoken so far about this question. They think that women have an absolute right of bodily autonomy in this matter, whereas I think in the case of abortion, that right is qualified by the fact that another body is involved.” He also suggested that abortion should be a topic for political debate… which is where things started in the US…

Elsewhere, in Poland the law was changed in 2020 which now means that women can only have an abortion in cases of rape, incest or if their lives are at risk due to the pregnancy. And in Australia, abortion was only decriminalised in New South Wales in 2019, Queensland in 2018 and Victoria in 2008. Women throughout the country still do not have a universal right to an abortion.

How has the rest of the world responded?
The United Nations’ High Commissioner for Human Rights Michelle Bachelet has called the US ruling “a huge blow to women’s human rights and gender equality”. She added: “Access to safe, legal and effective abortion is firmly rooted in international human right law and is at the core of women and girls’ autonomy and ability to make their own choices about their bodies and lives, free of discrimination, violence and coercion.

“This decision strips such autonomy from millions of women in the US, in particular those with low incomes and those belonging to racial and ethnic minorities, to the detriment of their fundamental rights.

“More than 50 countries with previously restrictive laws have liberalized their abortion legislation over the past 25 years.

“With today’s ruling, the US is regrettably moving away from this progressive trend.”

The Director General of the World Health Organisation Tedros Adhanom Ghebreyesus said: “I am very disappointed, because women’s rights must be protected. And I would have expected America to protect such rights.”

“When there are so many issues to tackle, so many challenges that face women and girls, we need progress, not to fight the same fights and move backwards” – Jacinda Ardern, Prime Minister of New Zealand

“Abortion is a fundamental right for all women. It must be protected. I wish to express my solidarity with the women whose liberties are being undermined by the Supreme Court of the United States” – Emmanuel Macron, President of France

“No government, politician, or man should tell a woman what she can and cannot do with her body” – Justin Trudeau, Prime Minister of Canada

“My heart weeps for the girls and women of the USA. A huge setback. The right to a free abortion is one of the most fundamental rights there is. We must never compromise the unrestricted right of women to decide over their own bodies and future” – Mette Frederiksen, Prime Minister of Denmark

How has the games industry reacted?
Many games studios have already spoken out against the overturning of the Roe Vs Wade ruling, with more making statements each day. Some who are based in the ‘Red States’ have announced that they will provide support to employees who may need to travel to have an abortion. Others have been less vocal or, in some cases, have asked staff not to make public statements

And some are accused of actually funding anti-abortion Republicans.

This is a great article by Game Developer which is being updated in line with announcements.

What can we do?
Women in Games is both heartbroken and furious at the decision to take away reproductive rights from women and girls. If this situation tells us anything it’s that we – within our community and beyond – need to collaborate, yell and fight to demand our rights. And we must remain vigilant about threats to those rights, and to our health and wellbeing.

With last month’s ruling, the message from the US Supreme Court to women is ‘We Don’t Care About You’. But by working together, women and girls everywhere can demonstrate collective strength and fight together for a better place for us all.

Women in Games has a mission to build a fair, equal and safe environment empowering girls and women in games. Those women and girls working in games, and playing them, are entitled to reproductive rights. We stand with these women and girls throughout the US who are now facing a bleak future without those rights – and will happily fight with them to once again achieve the freedoms they are entitled to.

If you would like to make a stand, here are some organisations and groups to consider:

Last word goes to New Zealand singer Lorde who used the recent Glastonbury Festival to make her thoughts known, as well as to rally women around the world:

“Wanna hear a secret, girls? Your bodies were destined to be controlled and objectified since before you were born.

“That horror is your birth right. But here’s another secret. You possess ancient strength. Ancient wisdom. Wisdom that has propelled every woman that came before you. That wisdom is also your birth right. I ask you today, make exercising that wisdom your life’s work because everything depends on it.”

Photo by Gayatri Malhotra on Unsplash