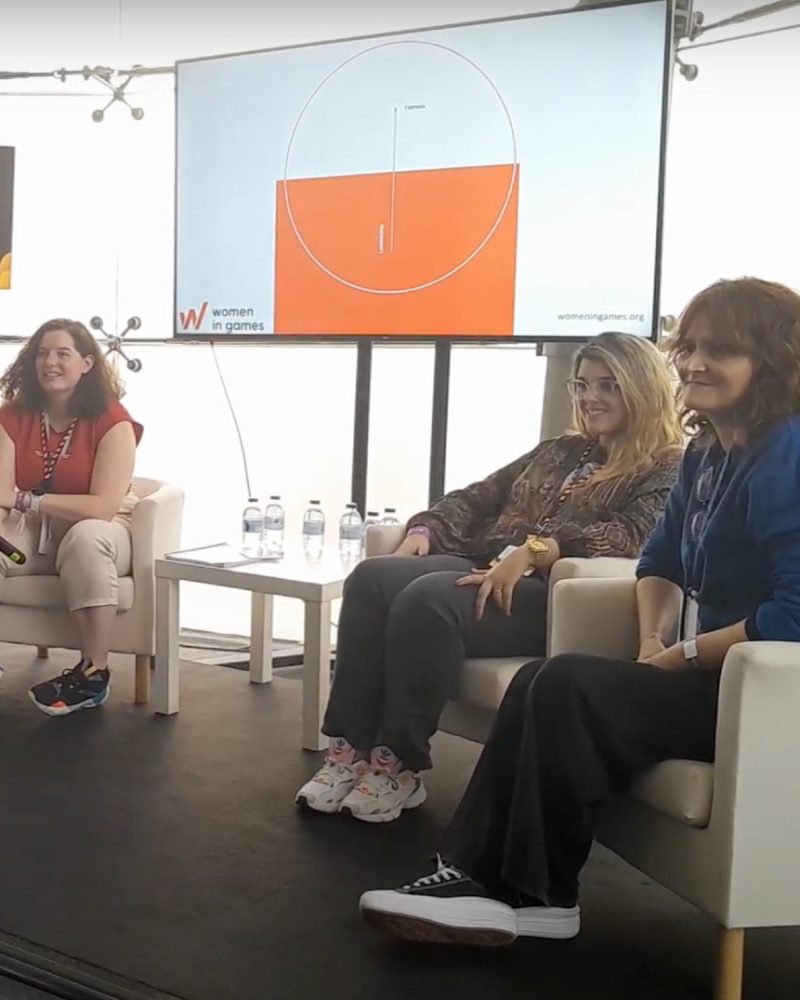 Women in Games (WIG) is a UK based, not for profit, with global reach and impact. Our work aligns with the United Nations Sustainable Development Goals (SDG’s) and is primarily focused on Goal 5: ‘Achieve Gender Equality & Empower all Girls and Women’. Our mission is to create new pathways, synergies, initiatives, activities and services, which foster opportunities that empower girls and women and bring about an equal playing field within the global gaming sector. The Women in Games core operational team is small, but our community and networks are large and includes over 1000 Individual Ambassadors in 70 countries, who follow our values of: Empowerment, Belonging, Breaking Barriers and Agility and who disseminate our work and support us to achieve our goals around the world

Last month Women in Games took  the opportunity to collaborate with Lisboa Games Week in highlighting game studios in the Portuguese industry that promote women and share our values.

We answered the open call for the Loading Zone (the space dedicated to indie games), on behalf of Women in Games, with three questions to those studios taking part:

Out of the 20 studios attending the event, four matched our criteria and accepted the challenge of talking about their experiences regarding the roles of women in games.

Digitality
Carolina Saraiva (Founder and Artist) and Inês Lopes (Programmer) are one half of Digitality, a small indie studio based in Fundão, Portugal. We asked them if they felt the public treated them differently in public showcases like Lisboa Games Week. Inês replied that for her, the main preconception is for people to “always assume I must be in a creative role. Because I’m a girl they say ‘oh you are a programmer? I thought you would be an artist’”.

Infinity Games
The biggest studio within this showcase was Infinity Games, which has 25 staff not only in Portugal but India, Turkey, Brazil, Australia and Pakistan. Teresa Alvadia joined in February this year, as the first Human Resources staff member to support the ever growing workforce and help provide a turning point in the studio’s new gender equality mission. September this year saw the first female developer join the team, while the art team has a 50/50 gender split. But the entirety of the leadership team is still male. The main difficulty for Teresa in attracting women to Infinity’s team starts at the recruitment stage: “I don’t see women applying to the company as a whole, but particularly in technical roles… developers of Unity, HTML, etc. I get mostly male applicants. Something is happening to girls when they are young that stops them from even trying to get into the industry.” Teresa underlines the need for female voices in key roles in games to create more balanced projects and in tune with the market needs and advises girls to just apply!

Witty Platypus
March 2022 is when Inês Almeida (programmer and ‘jack-of-all-trades’) took the plunge as a full-time game developer with her fiance, and their first game, Beer and Boomerangs, was released just a week after Lisboa Games Week. Being a newcomer to the industry, she noticed the predominant male landscape and got the same prejudice as other women regarding her role: “That’s the main thing I get as a comment. Yesterday, and the day before, I saw over and over again the assumption that I created the art and he programmed. It’s funny because for us, that’s the exact opposite.” She concluded by saying “the amount of women in the industry is growing, I hope these stereotypes will fade with time and we see more people just making the games they want”. Inês thought about enrolling in Computer Science when picking a Major and ended up not doing the course, stating she remembers it having one girl in a class of 30+ boys. That experience did not deter her away from the path she is on now, but she says “it is clear that things need to change, that the stereotypes are there. We need to keep having women playing games, getting into the industry, programming and so on”.

Nerd Monkeys
Diogo Vasconcelos (Founder and Publishing Director) was a pioneer in the Portuguese games industry as a founder due to giving the leadership of the studio to a woman. Studios with female leadership have been normally founded by the women in that position, so Diogo’s decision was a surprise for many. For him it was only about getting the right person, and internally the team accepted the change with open arms – helping each other to embrace the new vision, team structures and guidelines. But externally Diogo felt “what I can only describe as people ignoring this change in leadership. I think that when I announced Mafalda’s arrival, this news was not exactly taken seriously. Privately I was told by people outside the studio that I was crazy, that it was a bad idea and they wondered what the hell I was doing.” Talking about the female presence as a whole in the studio, Diogo refers to the same issues as Teresa from Infinity Games – not having enough female applicants coming from school – and offers a starting solution: “The academic world has to do more, and better. In the people it hires, in its marketing actions and student recruitment, in its apparent receptiveness to receiving women interested in the industry, and in demonstrating that there is room in the games industry for women.”

We were very happy to see these four studios being champions for women in games during the event, and to be able to share their stories to inspire and influence others. But this wasn’t our only activity during the Lisbon fair.

Our Individual Ambassadors Carla Sousa and Bárbara Barroso, and I, presented the Women in Games Guide: Building a Fair Playing Field in an insightful panel at the conference stage called Game Dev Camp.